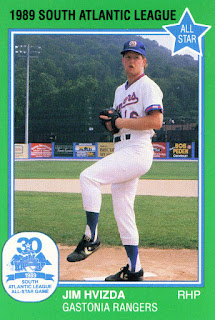 So I noticed this morning that an old post from November of last year was garnering some interest. Apparently several folks had found it by searching for James Hvizda. Not that unusual, sometimes family members or even former players themselves do searches. Then a reader left a comment on my earlier post that made me do my own search.

From what I can tell, Jim Hvizda, the same one shown here on card 25 of the 1989 South Atlantic League All-Stars set, allegedly stabbed his wife to death yesterday in Pennsylvania. After reading the criminal complaint and looking at pictures I am pretty sure it's the same guy. Facial features look the same. Pennsylvania is the correct state. The date of birth matches. What a shocker.

From what I can tell, this tragedy is the end result of a violent relationship. The victim had obtained a restraining order on Jim. She then agreed to meet with him. He apparently came to the meeting with the intent of killing her.

Unfortunately this type of pattern isn't rare in domestic violence relationships. This time it was fatal. Now a community is reeling, a woman has lost her life, and four children are without a mother or father.

As a person who deals regularly on a professional level with domestic violence let me take this opportunity to urge everyone to take these situations seriously. If you or someone you know or love is in a violent relationship, take action. Don't ignore it and don't underestimate the danger. There's no reason that any person should have to live in fear of a loved one or die at their hands.
Posted by Spiff at 3:13 PM

It was him. Jim Hvizda went to Eagan High School in Fairless Hills, PA and grew up on Thornridge Drive in Levittown, PA. He was a pitcher. I went to HS with his brother and new him from playing baseball.

more confirmation, the birthdate on the criminal complaint matches the birthdate of Jim Hvizda in Baseball-Reference. http://www.baseball-reference.com/minors/player.cgi?id=hvizda001jam

There is article from local paper, i posted initially yesterday.

I will second that is him. I have worked with him and have been a friend of his for about 18 years now. I am in shock that he could do this. He physically has changed and aged over the past 5 years quite a bit and not quite sure when he lost it. He was not the gentle giant that I knew.. Total tragedy

I was one of his wife Kim's closest friends and I never knew Jim as a gentle giant. An evil giant is more like it. He treated Kim terribly and I hope he rots in jail for what he has done. Her poor kids are without a mother now. The father was already absent for years - drinking was his priority.

I am happy the media did not give this low-life the spotlight for his baseball experience. What an evil, sick person. It's a shame that Pennsylvania is keeping him alive.