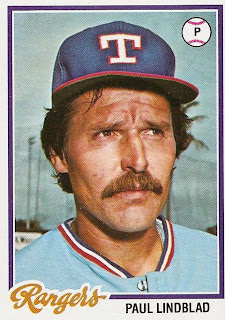 Aside from the airbrushed cap, this first thing I have always noticed about 1978 Topps card 314 is the top button on Paul Lindblad's uniform. It's two-toned. I can't recall having seen that on a modern uniform. Got to wonder what the story is. Perhaps Paul lost a button and the uniform guy couldn't find an appropriate replacement. Maybe the button's fine but the airbrushing job wasn't so good. Perhaps it's the lighting. Who knows?

Anyway, both the A's and the Rangers liked Paul Lindblad. He started his career with the A's in 1965 and played for them until traded to the Senators in May of 1971. He made the move to Texas with the team in 1972 and led the league in appearances by a pitcher before being traded back to Oakland in October of 1972. There he stayed until Texas purchased his contract in February of 1977 and he returned to the Rangers.

Lindblad appeared 42 forgettable times for Texas in 1977 and posted a 4.20 ERA. As with the most of the rest of his career, he was primarily a reliever but did make one spot start.

In 1978 the Rangers were looking for the quick fix. The 36-year-old Lindblad was serviceable but not impressive. He was also apparently nearing the end of his career. Those factors made him expendable. On August 1, 1978 the Rangers sold his contract to the New York Yankees.

Lindblad appeared in just seven games for the Yanks prior to the end of the season. In November of 1978 they sold his contract to the Mariners. Seattle released him in March of 1979, ending his Major League career.

Paul Lindblad got 14 years in the Majors before he hung up the spikes and retired to his home in Arlington, Texas. He kept busy with his fried chicken restaurant, hunting, fishing, and searching fields with his metal detector. He passed away on January 1, 2006.
Posted by Spiff at 11:30 AM