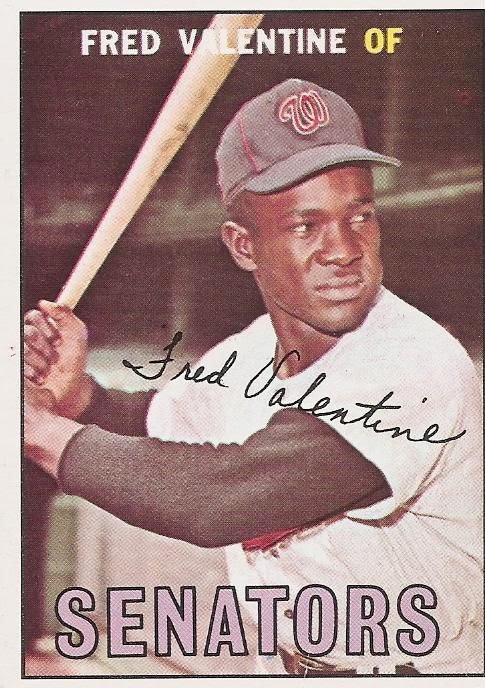 Fred Valentine and his cheek full of tobacco appear on the front of card number 64 of the 1967 Topps set. For some reason I really like the picture on this card. Just has the old-time baseball feel to it.

Valentine played all three outfield positions in 1967 for the Senators over the 151 games he appeared in. Of his total of 1078.1 innings played in the field 510.1 were in center, 467.1 were in right, and 100.2 were in left. His combined .989 fielding percentage was nine points higher than the league average. He actually had the 5th highest fielding percentage in the league. Unfortunately he also had significantly less range than the average outfielder.

Following a career-high number of plate appearances in 1966, Fred made 527 trips to the plate for Washington in 1967. He watched his batting average tumble 42 points to .234 and his on-base percentage slide down to .330. Even being fifth in the league with 10 hit by pitches couldn't rescue his on-base percentage. Valentine's 16 doubles, one triple, and 11 home runs were not enough to keep his slugging percentage from falling by over 100 points. He did continue to exhibit some speed on the base paths as he stole 17 bases while getting caught just three times. That was the best stolen base percentage in the league.

1967 was a downer season for Fred Valentine. He had been unable to maintain his 1966 numbers in his second full season as a regular player. That was not a good sign. Fred needed to increase his range and recover his power and average with the bat if he wanted to continue playing full-time in the crowded Washington outfield in 1968.
Posted by Spiff at 10:53 AM

That pretty much ended Valentine's career with the Senators. He was traded to the Orioles in June 1968, where he sat behind Frank Robinson, Paul Blair, and Don Buford.