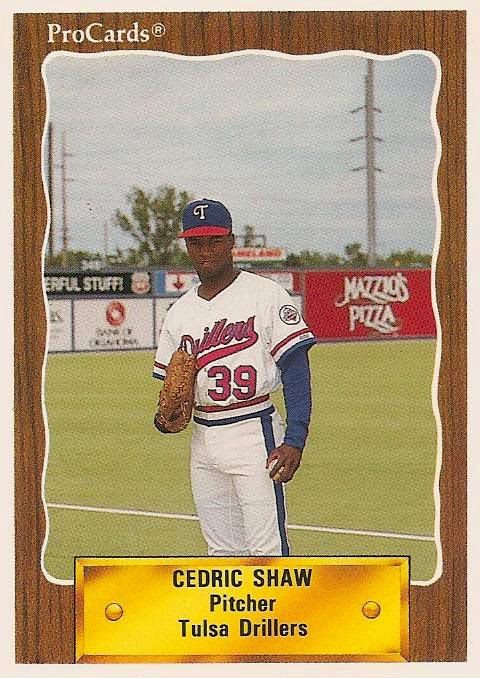 Cedric Charles Shaw, shown here on card 1154 of the 1990 ProCards Tulsa Drillers team set, was taken by the Rangers in the 12th round of the 1988 draft. He was playing for Grambling State University in Louisiana when Texas signed him.

Shaw spent 1988 with the Rookie League Butte Copper Kings and 1989 with Single A Charlotte. He was improving but wasn't impressing.

Those numbers were impressive and got Shaw promoted to Double A Tulsa. He appeared in 14 games for the Drillers in 1990, starting 12 of them. Unfortunately Cedric did not live up to his Single A success. Over 63 bumpy innings he watched his ERA balloon to 6.86 and his WHIP climb to 1.841. He also discovered Double A batters to be a bit more discerning as he struck out just 41 while walking 44. He ended the season with a 4-5 record for the Drillers.

1990 started out very well for Cedric Shaw but ended on a severe down note. He was struggling but the Rangers thought he would catch on at Double A and left him there to start the 1991 season. He needed to catch on quick though, another season like the second half of 1990 and Shaw might find himself unemployed.
Posted by Spiff at 12:59 PM