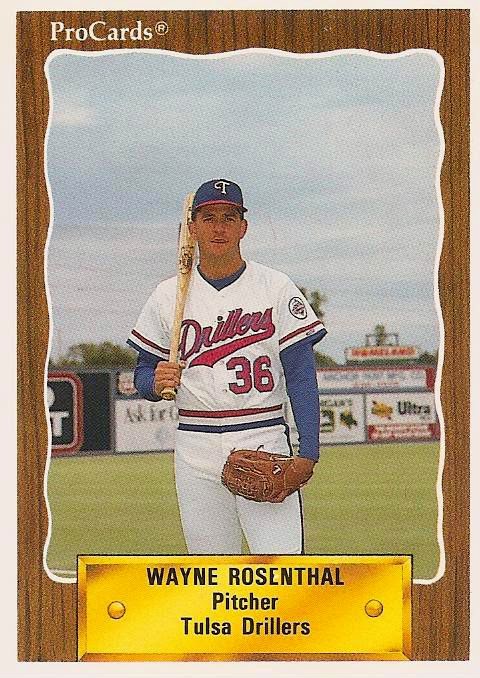 Up to 1990 Wayne Rosenthal, shown here on card 1153 of the 1990 ProCards Tulsa Drillers set, had been a pretty pleasant surprise for the Rangers. Texas drafted the big right-hander in the 24th round of the 1986 draft. He tore through the first three seasons as a pro without ever posting a season ERA over 2.10. That earned him some rapid promotion through the lower levels of the Rangers farm system.

As an aside, these cards make the players look really small. Rosenthal is 6-5 and was about 220 pounds when this picture was taken. Somehow the photographer managed to make him look like a little leaguer.

Ok, back to Wayne Rosenthal. He started the 1989 season with Single A Charlotte and posted a 2.22 ERA there over 20 games out of the bullpen. Up to Double A Tulsa he went to finish the season. He made 31 appearances for the Drillers and posted a 3.06 ERA. Good enough to stick but not good enough to get an off-season promotion to Triple A.

Wayne was primarily a reliever. He hadn't made a start since his 1986 stint with the Rookie League Gulf Coast Rangers. That trend continued in 1990 as he made 12 trips out of the bullpen for the Drillers and pitched 15 innings. Rosenthal posted a 2.40 ERA and 1.200 WHIP. His control was very good - he struck out twice as many opposing batters as he walked.

Those numbers earned Wayne a mid-season trip to the Triple A Oklahoma City 89'ers. He continued to appear in relief there and pitched 48 innings over 42 games while compiling a 3.00 ERA and an 1.208 WHIP. His strikeout to walk ratio improved as he whiffed 39 opposing batsmen while issuing just 18 free passes.

Rosenthal's performance at Triple A was good enough to keep him there for the start of the 1991 season. He was at the top of the minor league ladder and just one step from The Bigs. If he could keep command of his pitches and lower his ERA just a bit he might very likely get a shot in Arlington the next season or two.
Posted by Spiff at 1:26 PM