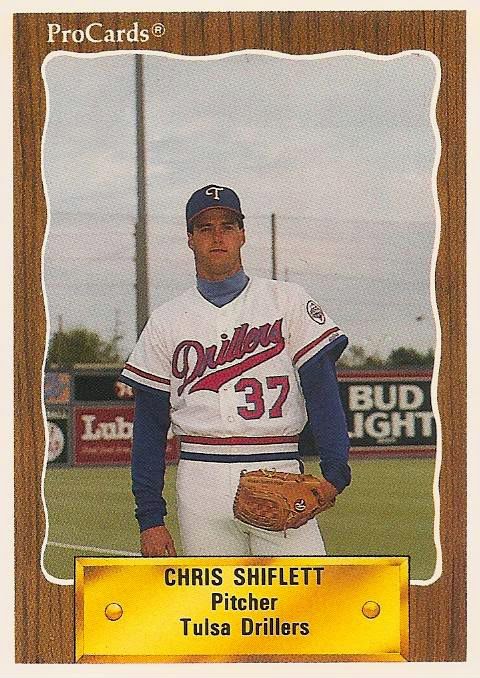 George Christian Shiflett, shown here on card 1155 of the 1990 ProCards Tulsa Drillers team set, was big news in 1986 when the Rangers took him in the first round of the draft. He was the third pick over all behind only Jeff Shaw and Moises Alou.

I am guessing injuries slowed Chris at Rookie ball in 1986 and Single A in 1987. He pitched a total of 3.2 innings in those two seasons yet still managed to get promoted each year. The benefits of being a first rounder I suppose.

In 1988 with Single A Gastonia, the lack of experience caught up with Shiflett. He got shelled to the tune of a 8.57 ERA over 21 innings. It was back to Rookie Ball for 1989, this time with the Butte Copper Kings. In spite of his 4.25 ERA with Butte, Chris got jumped up to Double A Tulsa for the 1990 season.

Shiflett made 13 appearances for the Drillers in 1990, all out of the bullpen. In the course of 27 innings he struck out 26 batters while walking just nine. That was a very promising stat. His ERA tallied to 3.00 and his WHIP to 1.222.

Chris' 1990 numbers were nothing to write home about but they were a significant improvement over his 1988 and 1989 efforts. Perhaps He was finally on the right track. The Rangers hoped so. After all, they used a first round pick on this guy and needed him to make good.
Posted by Spiff at 1:16 PM