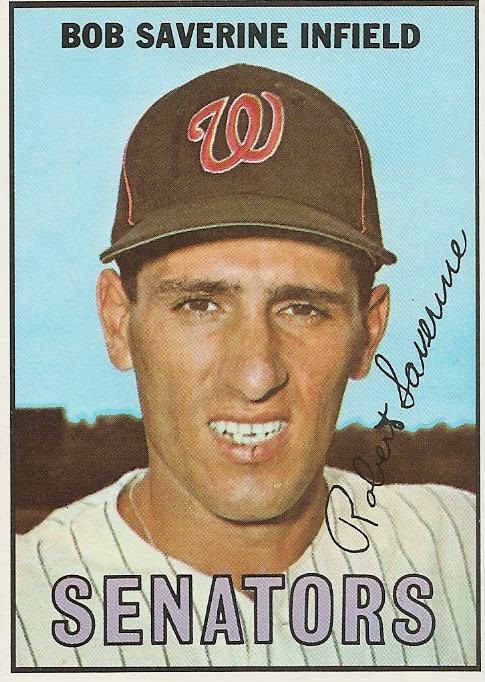 Bob Saverine looks like he just saw something unsavory as he appears on card 27 of the 1967 Topps set. I suppose he could have been reflecting on his .147 batting average in 1964, the last year he played for the Baltimore Orioles. He might also have been looking at his 1967 season with Washington.

The Orioles traded Saverine to the Astros for Don Larsen on April 24, 1965. He spent the season in the minors. The Senators snagged Bob in the Rule Five draft on November 29, 1965. He played for Washington in 1966 and got the most work of his career as he displaced Don Blasingame at second base.

In 1967 Saverine found himself in a platoon situation at second with Bernie Allen. Bob moved around a bit appearing at second base, short stop, third base, and left field. Most of his time was at second though. He put in 364 innings over 48 games and posted a .957 fielding percentage. That was quite a bit below the league average of .979. His second most frequently played position was at third base where he put in 49 innings over eight games. He also logged 46.1 innings over ten games at short stop. He was terrible at third and below league average at short. Three innings in two games in left field finished out Saverine's defensive work for the season.

Bob made 253 trips to the plate in 89 games for Washington in 1967. He compiled a .236 batting average and a .287 on-base percentage. He hit 13 doubles but that was the extent of his power. He also stole eight bases without getting caught.

All in all, 1967 had been a very down season for Bob Saverine. His bat, which had never been fearsome, suffered an alarming decline. He also experienced a disturbing loss of his glove abilities as well and appeared to be well on his way to being displaced by Bernie Allen at second. Unless Bob could dramatically improve his all-around performance, he was going to lose his spot on the roster completely in 1968.
Posted by Spiff at 11:05 AM