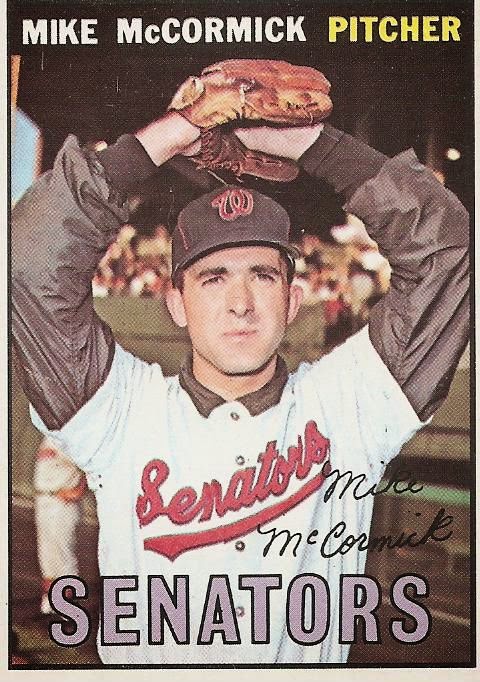 Card number 86 in the 1967 Topps set is an interesting one. Of course you can always play the ball/no ball game with Mike McCormick posing for the picture, but there's another aspect as well. On the front of the card McCormick appears in a Washington Senators uniform and is listed as a member of that team. Turn the card over and Mike is listed as a member of the San Francisco Giants. The write-up on the back also talks about the trade that sent McCormick to the Giants.

Mike hadn't had a bad 1966 season but Washington was starting to develop pitching and needed offense. On December 13, 1966 the Senators sent McCormick to San Francisco. In return Bob Priddy and Cap Peterson arrived in Washington.

Back with his original team, McCormick led the National League in wins in 1967 with 22 victories while posting a 2.85 ERA and 1.147 WHIP. That performance was good enough to earn him the NL Cy Young award and some MVP consideration. It was the high point of his career. Mike played for the Giants until midway through the 1970 season when they traded him to the Yankees. The Yankees released him after the 1970 season and he was signed by the Kansas City Royals. In June of 1971 the Royals released him and his Major League playing days were over.
Posted by Spiff at 10:51 AM

So cool how they used to wear windbreakers under their jerseys.

Similarly, Bob Priddy's card shows him as a Giant on front, but has a "traded to the Senators" note on the back.

(Actually, there are 2 versions of both players' card. The fronts are the same, but the backs are with/without the traded note.)

Cap Peterson's card was in a later series, so he is shown capless, as a Senator.