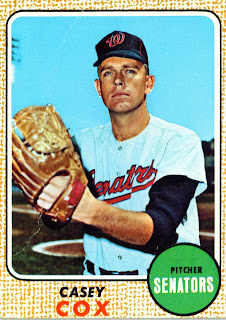 Casey Cox appears today on a creased number 66 in the 1968 Topps set. In 1968 he appeared hardly at all for the Senators.

Casey spent most of the 1968 season in Buffalo, New York. He showed up in 60 games for the Triple A Buffalo Bisons, all in relief. In 104 innings pitched he struck out 65 and walked 30. His minor league ERA was 2.34 on the season.

Casey appeared in just four games for Washington in 1968, all of them out of the bullpen. He went 7.2 innings while facing 29 batters. Four of those batters struck out and none walked. Cox posted a 2.35 ERA for the season. That was lights out for the Senators pitching staff.

I wonder why Casey didn't spend more time with the Senators in '68. In the short time he had with the team his ERA seemed to hold up. With the hurt that the Senators were in for pitching it is hard to understand why he spent so much of the season at Triple A. It's not like he was even a rookie, over the 1966 and '67 seasons he had thrown a combined 186 innings. As it was his 2.35 ERA was the second best of the whole pitching staff for the season.
Posted by Spiff at 12:00 PM