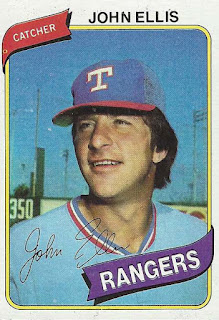 John Ellis is smiling on card 283 of the 1980 Topps set. Going into the 1980 season he had a lot to smile about. Almost fully recovered from his devastating injury during the 1976 season, Ellis had put together a fine 1979 campaign. Granted, he was spending more time at first base than behind the plate, but John seemed to be settled in to the backup catcher-first baseman role.

Unfortunately for Ellis, he battled a severe bone bruise in his right thumb most of the 1980 season. It got bad enough that he spent most of June on the disabled list.

In spite of the pain in his thumb, and the trip to the DL, John still appeared in 73 games for Texas and made 200 trips to the plate. His batting average fell to .236 and his on-base percentage dipped to .290. He walked 14 times but also struck out 23 times. He scored just 12 runs and accounted for only 23 RBI. As might be expected when playing through a hand injury, Ellis' power dropped significantly. He hit nine doubles, one triple, and only one home run.

In spite of the catcher designation on the front of John's 1980 Topps card, he played much more at first base. Over the 39 games he appeared at first, Ellis put in 239 innings. He committed just two errors in that time to bring his fielding percentage to .992, exactly the league average. Trying to give John's thumb some time to heal, the Rangers used him as the designated hitter in 20 games. He also made three cameo appearances behind the plate totalling to five uneventful innings.

The 1980 season was a bit of a downer for John Ellis. His thumb limited his playing time and his effectiveness at the plate. At 31 years of age, it was the type of season that could put a player on the front office watch list. Hopefully Ellis' off-season job as a bail bondsman would give his thumb a break and the bruise would have time to heal. He needed to be at full strength in 1981.
Posted by Spiff at 10:41 AM

Very nice blog you have heree