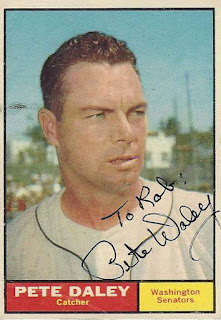 Well, the Rangers continue their off-season maneuvering. They signed catcher Chris Gimenez to a one-year deal after failing to trade for a backup receiver. They non-tendered newly acquired outfielder James Jones and pitcher Nick Tepesch. Apparently they are hoping to sign both to minor league contracts.

The club also completed the trade that send Leonys Martin to the Mariners by receiving the player to be named later. Patrick Kivlehan can play first, third, and the outfield. He was the number five prospect in the Seattle pipeline. Hopefully he will work out well for the Rangers.

The off-season autograph returns continue as well, in spite of a recent lack of stamps on my part. The Senators continue to clean up. Former Senator Pete Daley sent the most recent return, this signed 1961 Topps card. He even personalized the autograph without being asked. I sent this card to Mr. Daley on October 28th of this year. It arrived in my mailbox on November 27th. I have also recently gotten returns from former Rangers Steve Comer, Stan Thomas, Bob Babcock, and former Senators Dave Stenhouse, Dick Nen, and Chuck Cottier. Many thanks to all these gentlemen for their time and consideration in signing and returning my cards.

On a less successful note, I got a return to sender for former Ranger Larvell Blanks. I believe this is my second attempt to send to Mr. Blanks and the result has been the same both times in spite of using different addresses. If anyone knows of a good address to get his autograph, please shoot me an email.
Posted by Spiff at 11:00 AM

I tried an address in Arizona. I'll give that one a shot. Thanks!