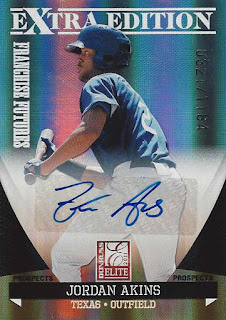 Went Christmas shopping on Monday with Mrs Spiff and the kiddos. Of course, I managed to work in a trip to Duane's Sportscards as well. Made the day much more enjoyable for me and Spiff Jr. The long-suffering Mrs Spiff caught a nap in the car while the girls watched a movie (thank heaven for in-car DVD systems).

I managed to fill in a bit more on my 1967 Topps Senators set and picked up a few Rangers cards I needed as well. The big attraction though was the retirement sale for one of the dealers (there are four in the shop). The guy had almost all his stock at 75% off and was trying to clear out his autographs and game-used cards at four for $10. One of the cards I decided to pick up was this 2011 Donruss Elite Extra Edition card of Jordan Akins. It's hard to see but the card is numbered 321/1184. Akins was a third round pick for Texas in 2010. He spent four seasons in the Texas system without making it out of Single A and his playing career is already over. It's a Rangers auto though, and one I didn't have, so I'll count it as a success.

After visiting the card shop, we had one more stop to make before moving on with our shopping trip. I contacted the Rangers a few days before about buying FanFest tickets at the box office. It's cheaper that way than paying the fees to purchase online and I knew we would be in the area. They told me the box office would be open. It wasn't. The gentleman sitting near the gate waiting for tours to arrive told me to walk down to the center field gate and go through the doors behind the baseballs out front. I did and found myself in lobby of the Rangers corporate offices. Fully expecting to be re-directed, I explained to the security guard at the desk why I was there. He asked me to sign in, directed me to a bank of elevators, and told me to go to the fourth floor.

Up I went. As I stepped out of the elevator I saw I was in a type of waiting room. Leather couches, television tuned to ESPN. The woman at the desk in front of the elevators told me she would call someone to sell me the tickets. As I waited, I looked around. On a nearby table sat the Silver Boot trophy. Opposite were the two American League Championship trophies. People with credentials walked through from time to time and phones rang in the background. Apparently, in my quest to buy two FanFest tickets, I ended up very near the nerve center for the Texas Rangers. I was able to get the tickets without any problems and the experience of seeing the trophies and being inside the front office definitely made my day. After all, it's not something that happens every time one does Christmas shopping.
Posted by Spiff at 10:59 AM

What an awesome experience!

Cool. If I can manage to go, I'll let you know and maybe we can meet up.

Sounds like a plan. Just let me know. Would love to meet up.

Who's retiring at Duane's? Since I moved out to Lubbock, I don't get in very often, but I always make a point to stop when I am in town.

Back in 2010 while I was working on my Master's, I had a professor that set up a meeting for myself a couple other students with one of the PR people for the Rangers. We were waiting in that same spot when Nolan Ryan came strolling through. My classmates were clueless as to who he was. Me - I was in too much shock to do anything but stare.

Unfortunately I don't know the names of all the dealers in the shop. The guy who is retiring is the one on the right as you walk through the front door. Cool story on seeing Ryan.