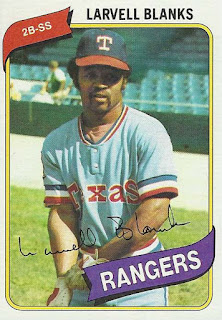 Larvell Blanks, shown here on card 656 of the 1980 Topps set, was a one and done player for the Rangers. Coming to Texas from Cleveland in an October 3, 1978 trade, Blanks accompanied Jim Kern to Texas.

The second base-shortstop designation on the front of Larvell's 1980 card is very accurate. He played in just 68 games for the Rangers in 1979 while serving as a backup to second baseman Bump Wills and shortstop Nelson Norman. Blanks would get just 138 plate appearances in 1979. Neither his .200 batting average nor his .259 on-base percentage were particularly impressive.

Being a role player in the late 70's and early 80's in Texas was a good way to find yourself on a new team. It happened to Larvell Blanks on December 6, 1979 when he was traded to the Atlanta Braves. Once again he would be joining a pitcher in making the move, this time Doyle Alexander. The Rangers received Adrian Devine and Pepe Frias in return.
Posted by Spiff at 11:14 AM