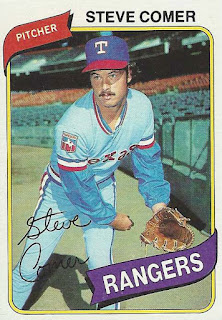 After two good seasons in 1978 and 1979, the wheels came off for Steve Comer in 1980. Coming into the season the Rangers had high hopes for Comer, shown here on 1980 Topps card 144. Those hopes were dashed early in the campaign.

Just four starts into the season, Steve's right shoulder started bothering him. He managed to hang in there and beat the Tigers on April 29th, but on May 4th he lasted just a third of an inning against the Orioles and left the game with soreness in his shoulder. He wouldn't take the mound again until May 21st, a game he got a no decision in. On May 24th in Oakland Comer entered the game in relief but lasted just two thirds of an inning before pain in his shoulder forced him out. That earned him a trip to the Disabled List.

Returning on June 28th, Steve tossed five innings against the Twins and picked up a win. Things were looking better. However, He continued to be bothered by his shoulder and Texas ended up sending him to Double A Tulsa for a rehab assignment on July 28th. He struggled there as well and ended up being recalled on August 15th and put back on the Disabled List. That practically ended his season. The Rangers activated Comer off the DL in late September but he didn't pitch again.

By the time Steve's 1980 season stumbled to a close, he had appeared in just 12 games for the Rangers, all but the Oakland appearance were starts. In just 41.2 innings, Comer posted a dismal 7.99 ERA and 2.088 WHIP. Obviously the shoulder soreness was hurting his control, he walked 22 opposing batters. His nine strikeouts were low but Steve normally had lower strikeout totals. He ended the season with a 2-4 record.

The numbers in Tulsa weren't much better. Three games started, 14 innings pitched. A 6.43 ERA and an 1.714 WHIP to end with a 1-2 record. The only bright spot was the fact that Steve walked just two batters while with the Drillers. That could be an indication his control was returning, or it could be an indication Double A batters were not as disciplined as Major League batsmen.

1980 had been a wash for Steve Comer. The Rangers were hoping he would be able to right the ship in 1981. Maybe his shoulder would heal up with the rest and treatments the off-season would bring. One thing was for certain, the Rangers needed 1978 and 1979 Steve Comer far more than they needed 1980 Steve Comer.
Posted by Spiff at 10:48 AM