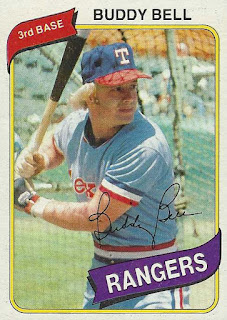 Buddy Bell, seen here on 1980 Topps card 190, was in his second season with Texas. His 1979 season with Texas had been phenomenal. He had quickly quieted the doubters regarding the loss of Toby Harrah in the trade for Bell. The fans and management expected great things to continue in 1980.

Buddy would find the 1980 season to be a lot tougher than 1979. He led the league by appearing in all 162 games in 1979 but that would change in 1980. Bell battled a pinched nerve in his back, a pulled muscle in his rib cage, and a pulled hamstring during the season. He lost 33 games to those ailments. Additionally, he was only able to pinch-hit in a few more contests, due to his hamstring issues.

In the 129 games Bell played in, he made 534 trips to the plate and posted a .329 batting average. That was second highest among Rangers starters. Buddy's .379 on-base percentage led the team. Both numbers were up from the previous season. He scored 76 runs while knocking in 83 RBI. Those numbers were, in part, a result of his 24 doubles, four triples, and 17 home runs. The fact that only two Rangers hit more homers speaks to what Texas lost with Bell's injuries. Unlike most power hitters, Buddy had a pretty decent eye. He walked 40 times while striking out just 39 times.

In the field Bell was indisputably the Rangers third baseman. He played 1045.2 innings at the hot corner over 120 games. His eight errors gave him a .981 fielding percentage - 30 points higher than the league average. He had significantly more range than the average American League third baseman as well. There were also three cameo appearances at shortstop. Three innings total with no errors.

The injury struggles had been a downer for Buddy Bell and the Rangers in 1980. In spite of that, the season had been a good one for Texas at third base. Bell was a defensive genius with a bat to match. He collected his second straight Gold Glove and was elected to the All-Star team. He also found himself in the MVP conversation. Even with the lost time to injury, Buddy Bell was making an impact in Texas. The Rangers had to be pleased with what they were seeing from Bell and it appeared they had third base covered for the foreseeable future.
Posted by Spiff at 12:09 PM