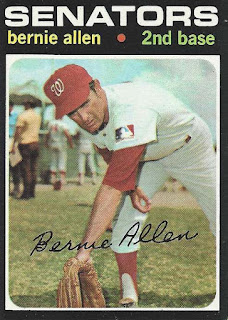 Bernie Allen, shown here 1971 Topps card 427, was entering his fifth season with the Senators in 1971. He broke in with the Twins in 1962 and came to Washington in a trade before the 1967 season. He was the Senators starting second baseman for several years but that ended in 1971.

With Tim Cullen grabbing second base, Allen was relegated to backup duties. He did some pinch-hitting and played some infield as well. Bernie appeared in 41 games at second base and played 217 innings there. He committed five errors to end the season with a .961 fielding percentage. That was much lower than the league average .980. Allen also played 261.2 innings over 34 games at third base and muffed five chances there as well. That gave him a .946 fielding percentage - ten points lower than the league average .956. The fielding numbers look even worse when it is considered that Allen had less range than the normal American League player at either position.

On offense, Bernie made 262 trips to the plate over 97 games. He tallied a .266 batting average while striking out 27 times. He did walk 33 times though and that helped bump his on-base percentage up to .359. Usually near the bottom of the order, Allen scored just 18 runs and bumped in only 22 RBI. He did hit 11 doubles, one triple, and four home runs.

Surprisingly, it seemed that fewer at-bats helped Bernie Allen's offensive numbers. He saw rises in average, on-base percentage, and slugging percentage. However, those numbers seemed unlikely to hold, Allen was 32 years old and his defense was already on the decline. With that in mind, Bernie would be making a move. Two moves really. First he technically moved to Texas with the franchise. Secondly, he moved to New York as the Rangers traded him to the Yankees on December 2, 1971. Texas got Gary Jones and Terry Ley back in return. The end of Bernie Allen's tenure with the Senators concurred with the end of the team's tenure in Washington.
Posted by Spiff at 3:53 PM