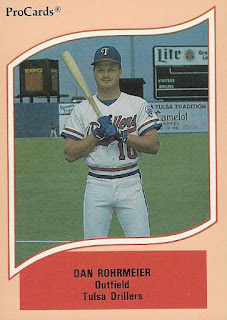 This scan does not do justice to the 1991 ProCards design. For some reason the card border comes off a light peach in the scan. In reality it is a bright blaze orange. Gives the cards a very minor league look.

Dan Rohrmeier had a decent offensive season for the Tulsa Drillers in 1990. His defense was another story and he ended up staying in Tulsa for the 1991 campaign as well.

Appearing in 121 games for the Drillers in 1991, Rohrmeier made 493 trips to the plate. He posted a .292 batting average (lower than the previous season) and a .380 on-base percentage (higher than the previous season). His power dipped a bit as he punched 20 doubles, two triples, and five home runs. Interestingly, his 60 walks outnumbered the 57 times he struck out, the first time for such an occurrence in his pro career.

Often used as a DH or pinch hitter, Dan played in 103 games in the outfield. He muffed just three plays all season and ended the year with a .984 fielding percentage. That was five points better than the year before.

1991 was not a bad season for Dan Rohrmeier. He improved his discipline at the plate and his defense, the two big areas he needed to work on coming out of 1990. On the other side of the ledger, his power dipped and he was already 25 years old. The Rangers had plenty of outfielders with power and average defensive skills. They apparently saw no reason to use a spot on the Drillers' roster for one whose power seemed to be starting to slip away. On January 20, 1992 Texas released Rohrmeier.
Posted by Spiff at 10:00 AM