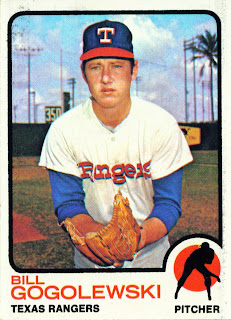 Day off for the Rangers today. Guess they're catching a breather after spoiling the Indians' home opener. Figured this would be a good time to take a quick trip back to 1973.

Today we see Bill Gogolewski on card number 27 of the 1973 Topps set. Bill's got one of the greatest names in Rangers history. Gotta be in the top five or six. The back of his card says that his nickname was "GoGo." Not very original perhaps but the announcers probably insisted on a nickname.

In 1973 Bill moved into the bullpen. He had started 21 games for Texas the year before but would only kick off one in 1973. He would be the workhorse of the pen. He led in appearances with 49, innings pitched with 123.2, and batters faced with 546.

In that work he posted a 4.22 ERA. He led the pen in strikeouts with 77. He also managed to give up more walks than anyone else in the pen (48) and got touched for the most runs (67). He also had a weakness for the home run, giving up 10 to lead the relievers in that category as well.

All in all 1973 for GoGo was almost a carbon copy of 1972 as far as his stats. He had moved from the rotation to relief but most of his numbers were within spitting distance of each other. The change of pace had apparently not affected him much either way.
Posted by Spiff at 8:56 PM

Great name...I actually traded for two of those cards on the Million Card Giveaway...I like the '73 set a lot. Good post.