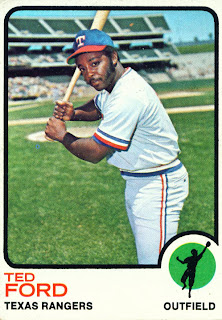 The Rangers are off today following their Opening Day victory yesterday. They are back in action against the Toronto Blue Jays tomorrow. Unfortunately I am working twelve hour shifts the next three days so my posting time will be very limited.

Today's card is number 299 in the 1973 Topps set and features outfielder Ted Ford. For the second card in a row we see a player who didn't play for Texas in 1973.

I've been trying to trade for all the '73 Rangers on the Topps Million Card Giveaway site...but didn't see this one.