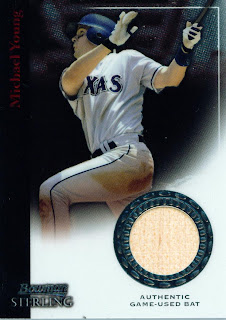 Very frustrating day for the Rangers and for Matt Harrison. Matt went seven innings and gave up one earned run only to lose 3-2.

Two runs were not earned due to an unusual occurrence, at least for the Rangers this year. Elvis Andrus and Michael Young, seen here on a 2004 Bowman Sterling bat card, both committed errors in the same inning. The first was Michael's, a throwing error to first to allow a runner. The second belonged to Andrus as he dropped a throw to allow a second runner. Matt Harrison then gave up a three run home run that should have been a two out solo shot.

The Rangers have really been stressing defense this season and have been doing well but something went wrong today. They committed three errors total during the game. That was as many as they committed in the first four games of the season.

Disappointing. Especially so for Harrison who has turned in strong outings in both of his appearances and has only an 0-1 record to show for it. Hopefully he can hang tough and get some wins.
Posted by Spiff at 3:43 PM