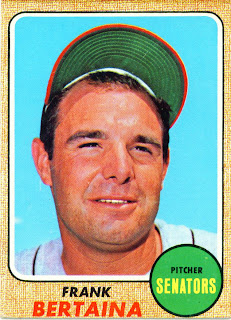 In our previous looks at the Senators' 1968 season we have seen that the position players were a fairly mixed bag but that several did have decent seasons. It's when the pitching comes up that things get bad.

Frank Bertaina, shown here on card number 131 of the 1968 Topps set, was primarily a starter for Washington that year - he started 23 of the 27 games he appeared in. He won only seven while losing 13. Frank posted a 4.66 ERA on the season. Part of that ERA is probably attributable to the 15 home runs he allowed. He did strike out 81 batters in the 127.1 innings he pitched but he also allowed 69 walks and led the league in wild pitches with 17.

None of those numbers are very good. They are even worse when one considers that 1968 was the year of the pitcher. It wasn't Frank Bertaina's year though.
Posted by Spiff at 3:50 PM

In 1965, Bertania had his own Orioles card. The following year, Topps put him on an "Orioles Rookies" card.

What I really like about this one is the hat. Topps used to do that if they weren't sure where the guy was headed. Here are some more: