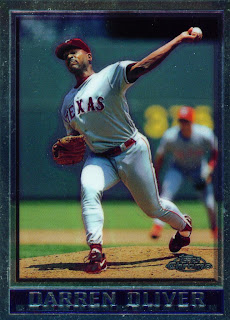 So the Rangers came from behind today and beat the Blue Jays 5-4 in Arlington. In the process they broke up a no-hitter bid that Jays pitcher Shawn Marcum carried into the seventh inning.

While Jarrod Saltalamacchia hit the walk-off single and Nellie Cruz tied the game with a three-run homer I think that Darren Oliver deserves today's card. Here he is on card number 418 of the 1998 Topps Chrome set.

Oliver came on in the eighth inning after Neftali Feliz got into some serious trouble and gave up a run. With only one out and the bases loaded Darren managed to shut down the Jays and get two outs without allowing a run to score. That kept Toronto from putting the game away and made Salty's hit the winner for Texas.

Looks like Oliver was a good pickup for Texas this last off-season. Same for Vladimir Guerrero, he went 2-3 at the plate and scored a run. Hopefully they left a huge hole behind them in Anaheim.
Posted by Spiff at 6:56 PM