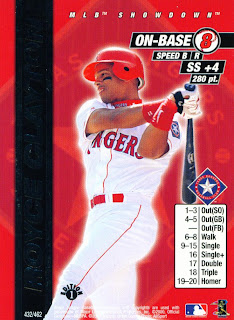 Royce Clayton finds himself on today's card. This particular card is number 432 in the 2000 MLB Showdown First Edition set.

I have mentioned before that I didn't discover Showdown until after the game was out of print. That didn't stop me from trying and liking it. In fact Mrs. Spiff also liked it. We got my Dad and brother hooked on it and formed a league that just finished its second season. Lots of fun.

I do have a couple of gripes with Showdown though. The primary one is the lack of cards. The cards were only issued from 2000 to 2005. A few Cooperstown cards were made for Hall of Fame players. Occasionally a custom card or two pops up on Ebay. Other than that you're stuck, no current players and precious few from before the 1999 season.

Kind of a bummer. I like the game but wish I could use some current players. After all, it would be nice to have Josh Hamilton, Ian Kinsler, and Nellie Cruz in the lineup. My Dad would like to see a few of the Cardinals of his youth and my brother has been trying to figure out a way to introduce injuries into the game.

All that got me to thinking that as much fun as the game is, there might be a better option. A quick look around turned up Strat-o-Matic and APBA Baseball. I haven't ever player either and am kind of leery about shelling out too much money just to take a look see. Looking for some feedback here. Has anyone out there ever played either or both of those games? If so which did you like best? Why? What are the pros and cons of either or both? Any additional thoughts are also welcome.
Posted by Spiff at 4:54 PM