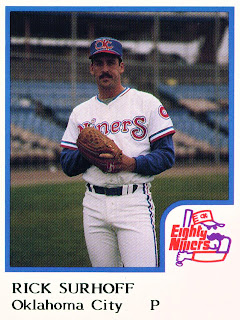 Today's a travel day. Well, for me anyway. Should be on my way home from visiting my folks.

Rick Surhoff did some traveling in 1985 and 1986. In 1985 he pitched for the Phillies, their Triple A team, and the Rangers. While he did well in the minors he wasn't particularly impressive in the Majors.

As a result Rick started his 1986 season with the Eighty-Niners. Rick would appear in 53 games for OKC and would pitch 85.2 innings. He posted a 5.46 ERA.

This was an improvement over his MLB experience but not enough of one for the Rangers to try him again. On July 28, 1986 they sent him to the Chicago Cubs to complete an earlier deal. Rick would stick it out in the minors until the end of the 1989 season and would pitch for three more organizations after the Rangers. He would never get back to the Majors though.
Posted by Spiff at 12:00 PM

He's the older brother of B.J. Surhoff I think.