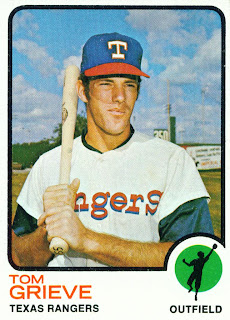 Tom Grieve played in 66 games for the Rangers in 1973. He played all three outfield positions and one game at designated hitter. He appears here on card number 579 of the 1973 Topps set.

In the 66 games he appeared in Tom put in 320.1 innings in the outfield. He handled 68 of the 68 chances he saw for a perfect fielding percentage on the season. That put him 22 points above the league average.

On the offense Grieve managed a .309 batting average in 136 plate appearances. That was a higher average than any of the three starting outfielders. His .348 on base percentage was behind only Jeff Burroughs in the regular outfield. Tom scored 22 times while bumping his teammates in 21 times.

By 1973 Tom seemed to be in a pretty good 60 game groove. This was his third season in the Bigs and he had averaged 59 games a season. His numbers were pretty good on both sides of the diamond. It remained to be seen though if he could handle an increased workload.
Posted by Spiff at 8:43 PM

Thanks for doing this blog. I really enjoy it and check it out often.

Share this interesting story with your readers. I read the D.C. Examiner every day and one of my favorite pieces is their little section on crime history. Here's a good one from this date in 1990 that I'd forgotten about. Its pretty amazing.

On this day, April 21, in 1990, Major League Baseball umpire Bob Engel was arrested for stealing 4,180 baseball cards from a retail store in Bakersfield, Calif. A security officer said he saw Engel, 56, pull a paper bag from the waistband of his pants and slip seven boxes of cards, valued at $143, into it. Engel, an umpire in the majors for 25 years, was back at work the day after his arrest, working the Dodgers-Astros game from first base. Baseball suspended him the following day and two weeks later Engel was hit with a new charge of trying to take cards at a second store. Engel retired after he was sentenced to three years probation.

Very interesting story James. Thanks for sharing. Wonder if Engel was/is really a collector or if there was something else going on.