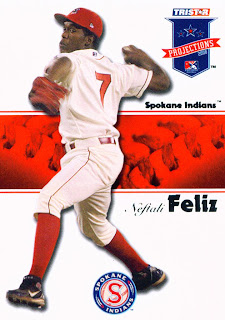 Frank Francisco blew his second save of the season on Saturday. That predictably led to his removal as the Rangers closer. Neftali Feliz, shown here on 2008 TriStar Projections card number 249, was named the new closer yesterday. Used this card of him with the Spokane Indians to try and stay with the minor league Monday theme. Frankie was moved to middle relief. This arrangement is only supposed to last as long as it takes Francisco to get things back together.

The Rangers won 9-2 yesterday so Feliz didn't make an appearance. Not so today. It took the guys ten innings to down the Indians in Cleveland. Francisco pitched a flawless ninth and Nelson Cruz launched a two run homer in the top of the tenth. That set the stage for Feliz to pick up his first save as the Rangers closer. Three batters and one strikeout later he had it.

Nice to see. That's how it's supposed to work. Three up, three down, lights out. Just keep it going Neftali.
Posted by Spiff at 11:55 AM