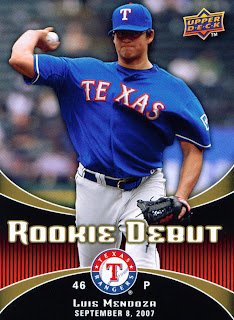 The Rangers sent pitcher Luis Mendoza to the Kansas City Royals today for cash considerations. Luis was going to have to clear waivers to make it back to the minors and he wasn't going to make the team this year out of Spring Training.

The Rangers got Luis from the Red Sox in 2006 in exchange for Bryan Corey. As this 2008 Upper Deck card indicates, he made it up to the big club in September of 2007. Since then he pitched 80.1 innings for the Rangers and ended with a 7.73 ERA.

I remember going to a Rangers game a couple of years ago and reading a write-up on Mendoza in the program. The emphasis was on his Mexican heritage and the excitement he was causing in his hometown. The article seemed to be real positive about him. I think that was probably in 2007 when his ERA was at 2.25.

I asked my Royals expert what he thought of his team's recent purchase. His reply was, "What have they done now?" When I explained he asked if I thought they had done ok. So much for experts.

I really can't say if the Royals did well or not. Luis has struggled recently but that may be because he was having a hard time getting playing time. It could also be because he just can't get it done. Time will tell. It would be nice for both him and the Royals to see him do well.
Posted by Spiff at 5:43 PM