Can't cruz if the wheels are coming off. 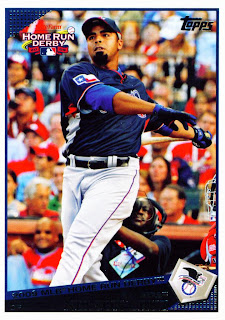 Nelson Cruz, seen here on card number UH317 of the 2009 Topps Update set, went on the DL today. Craig Gentry was called up from Triple A to replace him on the roster. Cruz injured his hamstring a week ago but had been trying to stick it out. Without his wheels though he couldn't get it done.

Speaking of wheels, they seem to have come off for the Rangers as far as catching is concerned. Jarrod Saltalamacchia and Taylor Teagarden were both optioned to Oklahoma City today. Salty had been there on a rehab assignment but was activated and assigned to Triple A. Teagarden had been replaced by Matt Treanor as the Rangers' primary catcher and was sent down. Max Ramirez was called up to serve as Treanor's backup. Saltalamacchia is supposed to serve as the primary catcher in Oklahoma City and Teagarden will be the backup. If the assignment lasts too long it is likely Teagarden will end up in Double A in order to get more catching time.

I must say that I am getting worried. First Chris Davis heads north on I-35 and then the two top catchers the team has. Not good. The DL and OKC are both getting crowded with the guys that Nolan Ryan said would take the division this year. Not encouraging.
Posted by Spiff at 8:32 PM