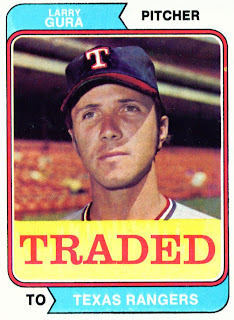 Apparently 1974 was the year of flipping ballplayers in Texas. Larry Gura appears today on card number 616T of the 1974 Topps Traded set. Like Terry Crowley, who has appeared on the only previous 1974 Topps Traded card we have seen, Larry never played a single game for the Rangers.

Gura came to Texas in November of 1973 to complete an earlier deal when the Rangers had sent Mike Paul to the Cubs for a player to be named later.

On May 7, 1974 the Rangers sent Larry and some cash to the New York Yankees in exchange for Duke Sims.

Larry Gura was in and out of Texas and may have never even actually worn a Rangers ballcap.
Posted by Spiff at 12:21 PM