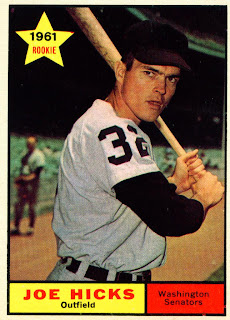 The back of card number 386 in the 1961 Topps set has a cartoon of a ballplayer looking at a snow covered sign that reads "To Washington." The accompanying caption reads, "Joe was drafted from Chicago last winter." That's true, technically speaking. Hicks was drafted from the Chicago White Sox as the 42nd pick in the 1960 expansion draft. He wasn't taken by the Senators though. They got him by trading Dean Chance to the other new team in the league, the Los Angeles Angels.

Joe spent most of the 1961 season in the minors. He would play 81 games at Triple A as opposed to 12 for Washington. In those 12 games he would get just 29 plate appearances and manage only a .172 batting average. Since he didn't get a single walk his on-base percentage was identical. Joe got just five hits and only one RBI. The RBI came from his first Major League home run.

In the field Hicks would play 57 innings split between the two corner outfield positions. In 15 chances he would make 14 putouts and get one assist. That gave him a 1.000 fielding percentage on that small sample.

If Joe Hicks wanted to get a shot with the Senators in 1962 he would need to work on his offense. The team was doing well in the outfield and it would take dramatically better numbers than he had demonstrated in 1961 to nail down a spot. Joe was going to need to get some boom in his bat to get more playing time.
Posted by Spiff at 4:44 PM