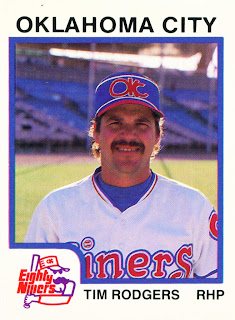 1987 was Tim Rodgers' second year in the Rangers farm system. Prior to that he had played five season in the Blue Jays organization - all in the minors. Rodgers, pictured here on card number 149 of the 1987 ProCards set, started the 1987 season at Double A Tulsa. After just three games and nine innings he was moved up to Triple A Oklahoma City.

With OKC Rodgers would make one start and 32 relief appearances. Those games would total 65.1 innings. His ERA during that time was 4.96 and his WHIP totaled out to 1.607. He did manage to strike out ten more batters than he walked, 35 to 25.

That about sums up Tim Rodgers' 1987 season. It also put the ending mark on his career as it was his last season in pro ball.
Posted by Spiff at 12:01 PM

Never heard of him, but I love the OKC cap.