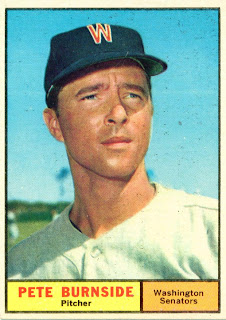 Pete Burnside was drafted eighth overall in the December, 1960 expansion draft. The Senators grabbed him from the Tigers. Because Pete appears on card number 507 in the 1961 Topps set he gets a decent picture and gets to keep his hat on. Am I the only one to find it a bit ironic that a man with the last name Burnside has very short sideburns?

In 1961 Pete was the only left-handed pitcher to see significant action for Washington. He would serve as as both long relief and as a spot starter. In 33 appearances he made 16 starts and finished nine games. Four of the nine games finished were complete games. His final record on the season was 4-9.

In those 33 games Burnside would pitch 113.1 innings, only one out less than the year previous with Detroit. He would face 492 batters and would strike out 56 of them. He would also walk 51 opposing players. 66 runs would score on Pete's watch but only 57 of them were earned. That left him with a 4.53 ERA to go with his 1.385 WHIP.

None of Burnside's numbers were standout - either for his career or for the team in 1961. Compared to what manager Mickey Vernon had to work with though, they weren't terrible either. All told Pete landed about the middle of the pack for the bullpen. What remained to be seen was if that would get him another look with the club in 1962.
Posted by Spiff at 3:53 PM