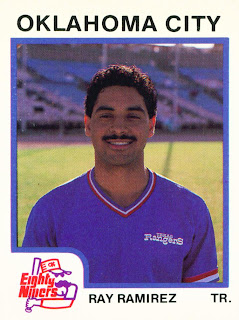 Up today on card number 156 is trainer Ray Ramirez. 1987 was Ray's first year as the trainer in Oklahoma City. He would stay with the team through 1991.

In 1992 he would move up to the Big Leagues and work as the assistant trainer with the Rangers. In 2005 he would start as the New York Mets Head Trainer. Ray's still in New York with the Mets but he doesn't seem to be much more popular than the management what with the past couple of seasons' injury record. Any Mets fans have an opinion you care to share?
Posted by Spiff at 5:04 PM