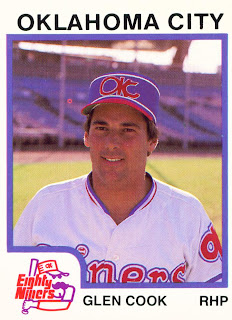 The Rangers drafted Glen Cook in the 24th round of the 1981 draft. By 1985 he had made the Major Leagues with a nine game stint late that year. In 1986 he would be back with Oklahoma City, just as he is pictured on card number 146 of the 1987 ProCards set.

1987 would be the end of the line for Glen. After seven seasons in the Rangers' system and only one stint in the Bigs he hung up the spikes.
Posted by Spiff at 9:15 AM