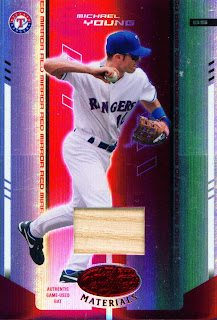 So I've spent some time thinking over the Rangers recent signing of Adrian Beltre. It's been several days since the deal was finalized and I am still not sure what I think. Seems like there are pros and cons to the deal. Hard to tell at this point which are more numerous.

Beltre is supposed to have better range at third than Michael Young. He is also a decent threat at the plate. Having said that I have read that his clubhouse presence leaves much to be desired. With a young team that can hurt. Also, after the Alex Rodriguez debacle, I am just a little leery of any long-term deals to free agents who haven't proved themselves with the club.

One of the other things I pondered was Michael Young's reaction. Young, shown here on his 2004 Leaf Certified Mirror Red game-used card (66/250), agreed to give up third base and become a designated hitter and "super sub." This is Michael's third position change in his time with the Rangers. He's won gold gloves at two of the three positions he's played and with each move has a stronger case to insist on staying put. He hasn't though. When asked why, he stated that he wanted to win and wanted to play his entire career with Texas. Could be lip service, could be he's telling the truth. After all, he's already got a long-term deal with the team and has little reason to be tossing out nice-sounding tidbits that he doesn't mean. Mike's got a reputation as a team player and all-around nice guy. Sure would be nice to see him with the Rangers until he retires.
Posted by Spiff at 7:56 PM

I think you'd be hard-pressed to find a better team guy than Michael Young. It's why he is my favorite active player.