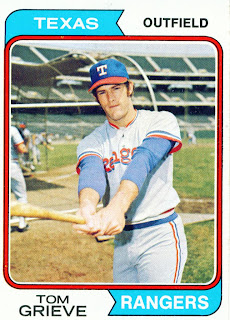 Thomas Alan Grieve, or Tag to most Rangers fans, was in the middle of a seven year run with Texas in 1974. In spite of the position designation on his card he played two more games as a designated hitter than he did in the outfield. That would start a trend of being a DH for significant portions of each season.

Tommy would get 288 plate appearances in 84 games in 1974 and would post a .255 batting average and a .311 on-base percentage. He would hit just nine home runs but two of them would come in one game against the Cleveland Indians. He also managed 32 RBI on the season.

In the field Grieve would play 229.1 innings in left field, 41 innings in right field, and two innings at first base. He wouldn't commit a single error in 69 chances at the three positions combined.

Tag wasn't doing badly but it still remained to be seen if he would be worth the $60,000 signing bonus the Senators paid him as a first round draft pick in 1966. He defense was fine and his offense seemed to be trending up. He just needed to build on that in 1975.
Posted by Spiff at 12:09 PM