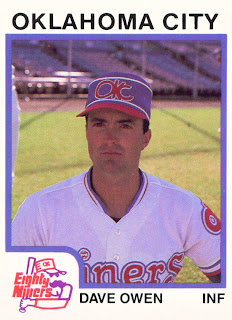 Dave Owen doesn't look very enthusiastic on card number 135 of the 1987 ProCards set. Perhaps it's because he realizes that this is the only card in the set with the next player in the photo line showing up on it.

By the time the Rangers signed Spike Owen's older brother in March of 1986 he had 85 Major League games under his belt with the Chicago Cubs. He wouldn't see any action in the Bigs with Texas though as he spent the entire 1986 season at Triple A Oklahoma City.

Interestingly enough, Dave and his brother Spike were both born and raised in Cleburne, Texas. That's the same town my Dad was born and raised in. Both were quite a bit younger that Dad though so he didn't remember them. I can remember seeing the Owen car dealership when on visits to my grandparents. Always thought that was pretty neat.
Posted by Spiff at 11:58 AM