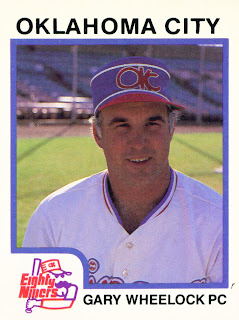 Card number 134 of the 1987 ProCards set features Oklahoma City pitching coach Gary Wheelock. The back of the card informs us that 1987 was Gary's first year as pitching coach with the Eighty-Niners.

Also on the back of the card is the fact that Gary was selected by the Seattle Mariners in the first round of the 1976 expansion draft and was the first player to throw a complete game for the franchise. All told, Gary's Major League career would last three seasons and just 36 games before ending in 1980.

Gary is currently the pitching coach for the Rookie Peoria Mariners in the Arizona League. From what I was able to determine he was only with the Rangers for one year before moving to the Mariners' organization.
Posted by Spiff at 9:11 AM

That "OKC" might be the most-80's logo in existence. Wow.

I remember him from the PCL in 1974 (or 1975). He pitched for the Salt Lake City Gulls. I listened to Phoenix Giants games on the radio since that was about all we could get (except for Dodger games)