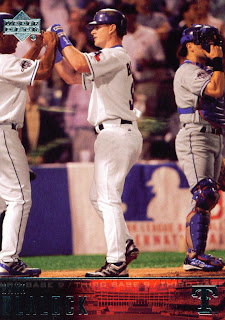 So I came home from work today to find a small white box waiting for me. Cards in the mail! Wahoo! The return label said they were from Ryan over at "O" No!!! Another Orioles Blog. Uh, oh. Ryan and I had agreed to a trade a few weeks ago and he splendidly kept up his end of the deal. Unfortunately I forgot. Terrible protocol I know. I quickly packaged up up the cards I was to send Ryan, shipped them off, and sent him an apologetic email. Then I opened the box.

Inside I found a good stack of carefully packaged Rangers that Ryan had made sure filled holes from my recently publicized wantlists. Just about every card was a hit and several team sets were finished off. One of the sets that Ryan finished off was the 2004 Upper Deck team set. Hank Blalock on card number 88 was the final one I needed.

In sum, Ryan is a great trader and isn't one to forget a deal once made. Take my advice and trade with him if you get the chance. You won't regret it. You also won't have to wait as long as he did when he traded with me. Sorry again Ryan and thanks.
Posted by Spiff at 8:16 PM