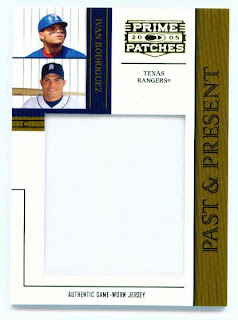 Can't really think of a lot to post about today. Have a couple of inches of snow on the ground and baseball season seems like it's still a mile away. Gotta say that I am missing listening to the Rangers. Not that I particularly care for the cold and snow either.

Texas has signed C.J. Wilson and Nelson Cruz to one year deals to avoid arbitration. That'll give them some time to work out longer term deals with them. Next up on the contract agenda are Josh Hamilton and Jon Daniels. Both are no-brainers in my opinion. Sure, Josh might suffer from some injuries and Jon might pull an occasional bad trade but both are positive forces overall. Hopefully the team can nail both down soon.

Mitch Moreland is the Rangers first baseman. The job is apparently his to lose and he is working hard on keeping it. Good idea. Chris Davis is running out of chances to get it and could come on hard. I doubt Michael Young would mind playing there everyday either if so assigned.

Today's card is a 2005 Prime Patches jumbo swatch card, number PP-2 in the set. It is numbered 394/500 and features a large piece of Ivan Rodriguez's jersey. Very nice looking card I think. Hope you enjoy it as well.
Posted by Spiff at 7:39 PM