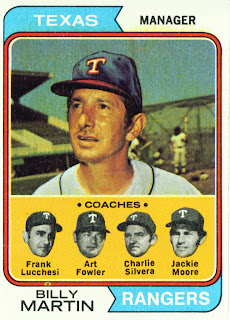 In September of 1973 owner Bob Short fired manager Whitey Herzog and replaced him with Billy Martin. Long-term the move cost the Rangers a chance to be steered by a Hall of Fame manager. Short-term the move had immediate results.

Martin, shown here on card number 379 of the 1974 Topps set, oversaw the Rangers first truly competitive season. The team went 84-76 to come in second in the American League West. Martin won the AP and UPI Manager of the Year awards.

The season was a success by any standard. A 27 game improvement and a doubling of attendance at Arlington Stadium. Things were looking good for Texas. If things kept going this way the team might finally be able to get on it's feet after the move to Texas.

Unfortunately Billy Martin was not a wholesome influence on his young players and rookies. His alcohol problems are well documented elsewhere and were in full swing during his time at the helm of the Rangers. As a result he had a difficult time maintaining order on the team. That would bode ill for his employment in the future.

On October 2, 1974 Billy made an unusual managerial move. He decided against using the DH and let starting pitcher Fergie Jenkins bat in the lineup. In the sixth inning Jenkins got a hit to end a no-hitter the Twins had going. He later scored and Texas ended up winning 2-1. An odd decision but it panned out for Martin and the Rangers.
Posted by Spiff at 8:18 PM

That is one awful airbrush job. It looks like the cap is melting on Martin's head.

Yeah, I forgot to mention the cap. Definitely one of the first things anyone notices about the card.