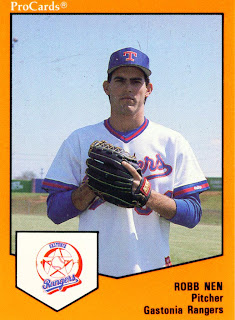 Things are getting moving in Spring Training camp. Adrian Beltre finally showed up on the field. Neftali Feliz says his hat is in the ring for a spot in the starting rotation. Mitch Moreland and Chris Davis are tearing it up. Inching closer to Opening Day and Minor League Monday getting spotty again as the season kicks off.

For today though we take a look at Robb Nen on card number 1003 of the 1989 ProCards set. According to the back of the card, the Rangers took Robb as the 34th selection in the 1987 draft. Baseball-reference says that he was selected in the 32nd round. Maybe he was the Rangers' 34th choice and they got to that slot in the 32nd round. However it happened, they drafted the son of former Senators pitcher Dick Nen in 1987.

By 1989 Robb had worked his way up to Single A Gastonia after playing in the Texas system for two seasons. In 1989 he would play in 24 games for Gastonia and would start all of them. He would pitch 138.1 innings in route to a 7-4 record. His ERA was a nice 2.41 and his WHIP tallied to 1.243. He also struck out 146 batters while walking 82, almost a 2-1 ratio. Typical of a young pitcher trying to work out some kinks he also let loose with 15 wild pitches.

In spite of the wild pitches Robb Nen appeared to be well on his way. If he could hold things together and continue to improve he had a decent shot at making the Bigs. Of course it is a long road from A Ball to the Majors and a lot can happen on the way.
Posted by Spiff at 8:24 PM