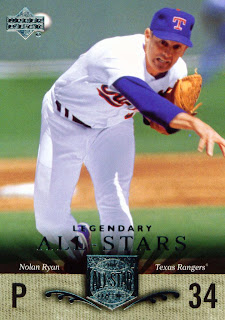 So there's been more drama with the Rangers front office. After the mid-season bidding war last year I was hoping that things would settle down for awhile. Apparently not.

Seems that Chuck Greenberg has stepped down as managing partner and chief executive officer. As you may recall, Greenberg was supposed to run the business side of things while Nolan Ryan, shown here on card number 93 of the 2005 All-Star Classics set, took care of the baseball side. Apparently that didn't work out too well and now Greenberg is gone and is selling his interest in the Rangers.

No official word on why Chuck left. He did issue a statement that said in part, "Unfortunately, Nolan Ryan, the co-chairmen and I have somewhat different styles. While I am disappointed we did not work through our differences, I remain wholeheartedly committed to doing what's right for the franchise."

Not sure what all that refers to but there was evidently a division and Ryan came out on top and is now running the ship. Nolan was named the replacement CEO and will oversee all aspects of the ballclub. Neither Ryan or Greenberg holds a majority stake in the franchise so there were other partners involved in what went on.

Jon Daniels says that nothing has changed as far as the baseball side of things. Hopefully that's true and there is no trickle-down to the players.
Posted by Spiff at 7:17 PM