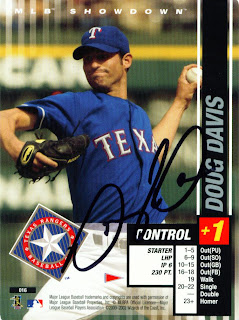 So the Rangers announced their 2011 starting rotation just after lunch today. As set the rotation is: C.J. Wilson, Colby Lewis, Matt Harrison, Tommy Hunter, and Derek Holland. Brandon Webb will start the season on the Disabled List. Neftali Feliz and Alexi Ogando are returning to the back-end of the bullpen. Michael Kirkman will go to Triple A and continue to start there.

At 1656 this afternoon T.R. Sullivan reported that Tommy Hunter had strained a groin muscle in today's game against the Reds. Tommy is saying that he will be ready for opening day but the club isn't so sure. The official word is that he is questionable. This is the third verse of this particular tune for Hunter. Somewhere Michael Kirkman's ears just perked up.

The bullpen is in flux as well. Apparently Mark Lowe has pitched himself out of being a lock for a slot. Now he, Pedro Strop, Brett Tomko, Dave Bush, and Mason Tobin are in the hunt for the final two bullpen spots. Could be a day before decision there.

In unrelated news, the Rangers scouted Doug Davis today. Davis, shown here on a signed 2002 MLB Showdown card, is a free agent after a very questionable season with the Brewers last year. I like Davis' story but I am just not sure that would be a good signing right now. He is a lefty though and so must be given his chances.

Well, at least Michael Young and Jon Daniels have supposedly kissed and made up. Now to get the pitching settled and healthy on Opening Day.
Posted by Spiff at 8:57 PM