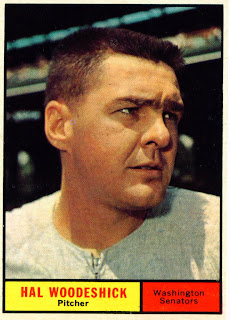 So the Rangers are starting to whittle down the numbers as Opening Day gets closer. Four players went to the minors today. There will be more following as the team pares down the 52 players still in camp.

In December of 1960 the team had the opposite problem. They didn't have enough players. As part of the process of getting some they drafted Hal Woodeshick from the Minnesota Twins. Woodeshick looks to still be in his Twins uniform on card number 397 of the 1961 Topps set.

Woodeshick was primarily a starter for the Senators in 1961. He started six of the seven games he appeared in for them. in 40.1 innings pitched he posted an ERA of 4.02 and a WHIP of 1.537. In spite of those numbers Hal had a 3-2 record.

On June 5, 1961 Washington traded Woodeshick to the Tigers. In return they got infielder Chuck Cottier. After less than a season with the new franchise Hal had moved on.

Speaking of moving on, this is the last card in the 1961 Topps Senators team set. Starting next week we will return to 1962.
Posted by Spiff at 7:04 PM