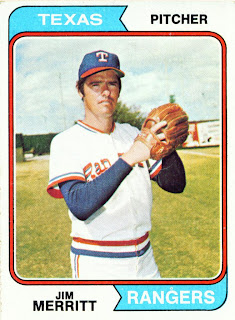 Well the Rangers finalized their Opening Day roster today. Chris Davis, Craig Gentry, Brett Tomko, and Taylor Teagarden are all headed for Triple A. Mark Lowe, Pedro Strop, and Mason Tobin made the final spots in the bullpen.

With the season about to start I decided to make a quick trip back to 1974. As things get going and there is news concerning the current team this regular feature may get pushed aside temporarily.

Today we see Jim Merritt on card number 318 of the 1974 Topps set. Merritt and Jim Shellenback were the only two left-handers to appear out of the bullpen on a regular basis for Texas in 1974.

Merritt's 1974 season was interrupted by a three week stint on the disabled list in June. When he returned to the mound in August he was on fire. In 14 relief appearances in August and September he allowed just one run. Compare that to the period before his injury when he had allowed 14 runs in 12 trips to the mound. Despite his comeback he ended the season with no saves and no wins.

Even the late-season performance couldn't save Jim's 1974 season. His ERA would end up at an unsightly 4.13 and his WHIP tallied to 1.592. That in just 32.2 innings. In spite of a stunning end to the season there were still question marks as to Jim's future. He would need to keep up the post injury performance and avoid further damage if he wanted to be a part of the Rangers relief corps in 1975.
Posted by Spiff at 4:54 PM