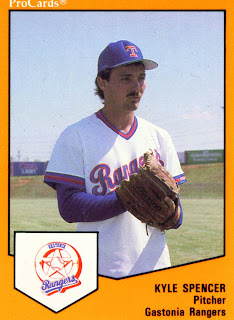 Kyle Spencer, shown here on card number 1002 in the 1989 ProCards set, was the 26th selection in the 1988 draft. He played in Rookie ball that same year. In spite of a horrendous 4.14 ERA he earned a promotion to A ball.

In 1989 Kyle appeared in 43 games for the Gastonia Rangers. All but two of those appearances were in relief. In 85 innings he struck out 105 batters while walking 39. Four of those walks were intentional. He did struggle with his control a bit as he hit nine batsmen and threw five wild pitches.

Spencer's ERA for the season came out to 2.22. That was good for almost a two point drop from the previous year. His WHIP tallied to 1.153, another significant drop. Kyle also handled 23 chances at his position without an error.

All in all 1989 had been a success for Kyle Spencer. He had improved his numbers while pitching in 25 more games and a level higher than the year previous. That was good enough to earn him a promotion. In 1990 he would play for the Charlotte Rangers in A+ ball.
Posted by Spiff at 9:04 PM