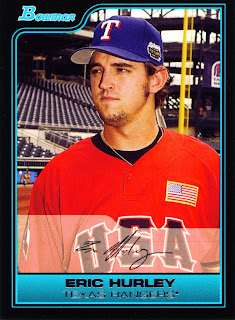 The Rangers have a unique situation in camp this spring. They are making pitching moves that actually count. It's been quite awhile since that happened but it's a nice position for the team to be in.

One of the pitching surprises this year spring has been Eric Hurley. Hurley, pictured here on card number FG29 of the 2006 Bowman set, was once a top pitching prospect. However he missed the past two seasons with injuries and that hurt his ranking within the system. He showed up at Spring Training healthy and ready to do business and managed to pitch himself back into view.

In spite of his impressive spring the Rangers felt that Eric wasn't ready for a Big League assignment. Likely a good choice considering how much time he has missed. A couple of days ago they sent him to Triple A.

Today they sent pitcher Tanner Scheppers to minor league camp. Tanner had done well in camp but not as well as Hurley. He also looks promising but could use some further seasoning. That knocks two pitchers out of contention for the starting rotation.

In the meantime Neftali Feliz has hurled himself into contention for a rotation spot. There had been some early talk about moving Feliz to the rotation but that had died, in part because Neftali said he preferred to remain a closer. Within the past week or so he changed his mind and said he would pitch where the team needs him. He then proceeded to put on quite the show as a starter. Good enough to impress Nolan Ryan. Good enough that he may be a starter on opening day.

If Feliz moves to the rotation he will join Colby Lewis and C.J. Wilson there. The other two spots are still up in the air. Derek Holland thinks he'll get one. Tommy Hunter was hoping for one but has stumbled in camp. Matt Harrison seems to be trying for one. Brandon Webb would like to be in there as well but needs to play catch-up. A few other guys are hanging tough and looking for an opening as well.

Of course if Feliz is starting the team will need a closer. Alexi Ogando has said he would be willing to give it a shot. Mark Lowe would like to as well. Darren O'Day needs to find his groove again quick. Darren Oliver and Arthur Rhodes will be in the pen on Opening Day. Dave Bush would like to be but Mason Tobin is making a run at the long relief spot and Brent Tomko is making a case as well.

Over all it looks like the Rangers will have some depth at Triple A. They should also have some guys coming back from rehab early in the season. Nice to know that nobody is going to just fall into a spot on the pitching staff this year. Hopefully the club won't miss Cliff Lee all that much.
Posted by Spiff at 7:25 PM