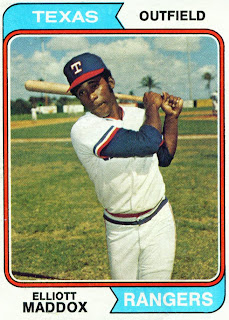 Elliott Maddox appears today on card number 401 in the 1974 Topps set. In 1974 he did not appear at all for the Rangers. They sold him to the New York Yankees on March 23rd of that year.

The Yankees would hold on the Elliott until January 20, 1977 when they traded him to the Orioles. He would play one season for Baltimore before being granted free agency in October of 1977. On November 30, 1977 he signed with the New York Mets. He would stay with them until released on February 5, 1981. In June he signed with the Phillies but never appeared in a game with them. After eleven seasons his Major League career was at an end.
Posted by Spiff at 4:24 PM