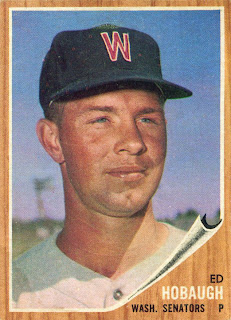 After spending the entire 1961 season in the Majors, Ed Hobaugh spent part of the 1962 season in the minors. Interestingly, he pitched in the same number of games for Washington both years.

Hobaugh, shown here on card number 79 of the 1962 Topps set, appeared in 26 games for the Senators in 1962. The big difference from the year before was that he was primarily a reliever, only starting two games. As such his innings pitched fell by almost half to 69.1 for the season. His ERA and WHIP also fell - to 3.76 and 1.313 respectively. That gave him the third best ERA and the best WHIP of any Senators' reliever that year.

Ed was still struggling though. He struck out 37 of the 291 batters he faced but he also walked 25. A better ratio than the year before but still one that needed improvement. Another troubling note was that while the number of batters he faced dropped by close to half, the number of home runs he surrendered only dropped by about a quarter. That was a number that also needed watching.

In Ed's and the Senators second season things had not gone as well as might be hoped. Hobaugh had lost his bid to remain in the starting rotation. On top of that there were some potentially ominous trends in his stats to go along with the improvements that he had been able to make. He would need to address those weak areas if he hoped to hang on in the bullpen in 1963.
Posted by Spiff at 1:03 PM